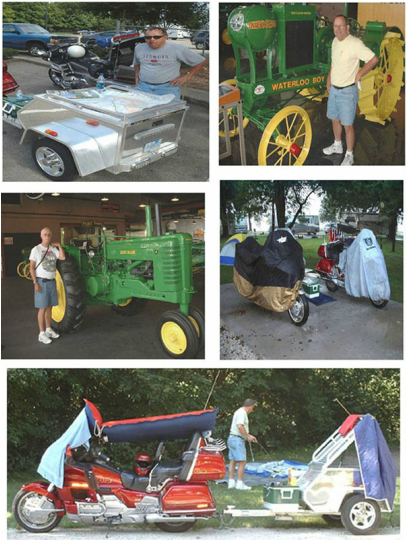 The trip began Monday, August 6, 2007, for Richard leaving Grand Forks, ND, headed for MPLS to met up with his traveling partner. We meet at Ernie's place Tuesday, August 7, at 6:30 A.M. for final loading of the gear. It was a foggy, humid, cloudy, warm morning as we pulled away. We took highway 35 South to 90 East and then cut off on 16 where we stopped at a little town named Preston, MN, for coffee. Continuing on highway 16 East to La Crosse, Wis. Here we filled with gas, had soup and headed East on highway 14/61. It was now humid, still and 82 degrees. This route was followed through very scenic country. Arriving at Richland Center, WI., around 1 P.M. Richard was having trouble with his trunk buttons, so we headed for a large motorcycle dealer 4 miles East named Vetesnik Power Sports, 27475 U.S. 14 E., Richard Center, WI. I told the service man my troubles and he said to leave it with him. But it might take sometime to work the bike in for fixing. In two hours it was fixed for $38 and we were riding again. This is the second stop here for Richard. Then back to Richland Center and South on 80 to highway 60 and West to Prairie du Chien. Onto highway 18 and on to Dubuque, Iowa for gas and to find a campsite. We knew the name of the campgrounds, but couldn’t seem to find anyone to give us correct directions to the site along the river in 10 foot corn stalks. Finally when it was nearly dark we arrived at the Grant River Recreation Area. Hurrying up to get our tents set up before dark we didn’t notice the railroad tracks a few feet away. After climbing into our tents we found out the freight train comes about every 15 minutes and blows it's horn right by our tents. With the train noise and the humid conditions we didn't get much sleep. Also, somehow we allowed some mosquitos to spend the night with us in our tents.

Wednesday found us up by 6. (Remember we are tenters with the bare equipment so we go to bed when the sun goes down and get up with the sun.) After showers and packing we were on the road again. Today found us heading South on highway 52, which is a beautiful scenic ride along the Mississippi River. (At the start of our trip we agreed to not ride any interstates or freeways if possible.) After a short ride we came upon a neat little café along the river in a town called Bellevue, Iowa. Now finding highway 67 it was off to Moline, Iowa. In Moline we toured two large
buildings displaying John Deere equipment. We both admitted these displays could be found at any large John Deere implement dealer across
the country. It was cool in the buildings, so the tours were worth that. Now we were off to find an old Army Arsenal Museum. Little did we know
this was on an active Army base. So after getting our permits to enter we found out we had to have long pants and long sleeve shirts on before
we could go any farther. Changing clothes we were off to find the museum. After finding it we spent alot of time viewing the many old guns
and other old war equipment. Then it was down to the river to watch a barge come through the locks being pushed by a tugboat. Still very hot,
so we didn't spend much time. Remember we are still in long pants and long sleeve shirts. Tonight found us stopping at Wal Mart for supplies.
This included a BBQ chicken, crackers, fruit and some beer. Still hot we headed for our campgrounds named Clark's Ferry. Arriving around 6:30 P.M. it began to cloud up. All day we had been a few miles behind rain. The forecast was for storms in the area throughout the night. Arriving
at our camp site it began to drizzle as we hurried to get our tents set up. About 7:30 it began to rain, so we left our supper on ice. (I found out later Ernie got away with part of the chicken in the rain, ha, ha.) So here we were at 7:30 in our tents in a storm. Neither one of us found
any sympathy as we called home from inside our tents. We got comments like: "you guys remember the Indians setting their tents up on high
ground." And, "you guys know enough to find a motel when it looks like rain.

Thursday morning found us up early dipping water out of our tents. Richard got up at 4 and spent a couple hours in the bathhouse sleeping
on a bench. He couldn't take it anymore in the wet tent. Now the rain had stopped, so we put our gear away wet and headed down the road
Northwest to Iowa City, Iowa. Here we stopped for an early lunch and on to Waterloo, Iowa, by highway 380. A lot of truck traffic on this road. Looked like rain, but we never got any. Found a nice little cafe here and treated ourselves to pie and coffee. A chamber of commerce was near so we got information on touring the John Deere tractor assembly plant. We took the Fri. morning 8 A.M. tour. Our camp grounds for Thursday night was the George Wyth State Park. Very nice campgrounds. Arrived here around 5 P.M. We found a nice shady spot and unpacked our wet camp gear and hung it out to dry. Our BBQ chicken was still on ice, so we had that for supper after showers. By bedtime our camp equipment was dried out. We finally got a good nights sleep without any interruptions.

Friday found us up again around 6 showered, packed and headed out around 7 for the John Deere tractor assembly plant. This wasn't far away, so we stopped and had breakfast on our way. This tour lasted about 1 1/2 hrs. We followed some tractors being assembled. This was very interesting to a couple of old farm boys. We found highway 6 and headed to Iowa City. Here we toured the "Old Capitol" building. This was an interesting old building to tour. The capitol is now at Des Moines. Now it was off heading Northwest to highway 380 to Forest City, Iowa, to make our 1 P.M. tour of the Winnebago assembly plant. Only a milk shake stop and gas on this drive. By the way don’t have a malt at an express gas
station. They taste like Chocolate with sand added. Arrive at the assembly plant just in time for the tour. This tour was great and Richard says it was probably the highlight of the trip outside of the rain in his tent. Ernie had been through an RV plant before, so his
favorite was the tractor assembly plant. Anyway after the Winnebago tour Richard asked the tour guy if he knew a plant worker named Dean Rogers? The guide said yes and took me in his car to find Dean. Dean is Nans cousin originally from Velva, ND. As we arrived at Deans work
place we caught him clocking out for the day. He was so surprised to see me. We agreed to meet him back at the Visitors Center for a visit. After a nice visit with Dean we decided to go the 100 some miles back to MPLS and spend the night in a good bed. So we headed North on 69 to 35 outside of the Twin Cities. We arrived at Ernie's place in Apply Valley around 7 P.M Ernie's wife had a cold beer for us. We sat outside and
talked over another enjoyable and safe trip. Another bike trip we'll be able to talk about and even have a few laughs again. We have made many
trips across the US and Canada together. Each one becomes more enjoyable as we age.

Talked with Ernie on Saturday and he was changing oil and checking over the bike. Sounds like he's getting ready for another trip next year?
Don't forget me Ernie I'll be waiting for the phone call of when you have another great trip scheduled