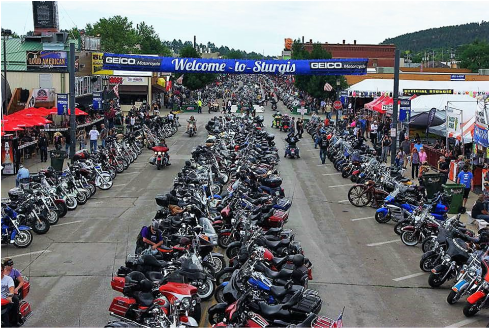 This motorcycle trip has been planned for nearly a year and now it was time to take off. It rained here in Grand Forks, N.D. early this Sun., Aug. 5, 2001 morning, but now at 12 noon it was clear and very hot. The plan was for me to ride to Minot, N.D. and hook up with Mel Gefroh and Pat McNally to ride with them to Sturgis, S.D. for the annual motorcycle rally and ride the Black Hills. I arrived in Minot around 4 P.M. It was decided to meet for a cup of coffee around 8 P.M. and discuss any last minute plans. The coffee meeting was held at Homesteaders and the final touches were attended to. Thanks Pat for the pie and coffee. This was Pats first major bike trip, so he was excited. Mel and I have done this week trip a number of times. We would meet at Pat's at 6 A.M. Mon., Aug. 6.

Our first stop Mon., Aug. 6, was at Washburn, N.D. for breakfast. Then off to Bismarck, N.D. for gas and head South down road 1804. We stopped for water breaks along the way. The temp. was in the high 90s. We gassed up at Mobridge, S.D. East on 12 and 83 South into Pierre, S.D. for the night. When we arrived at Pierre the temp. was pushing 99. A cool refreshment, supper and the night at Days Inn.

Tuesday, Aug. 7, saw us up and on the road by 6 A.M. We knew it was supposed to be hot, so we headed out early. The word at the gas station was that Interstate 90 had allot of construction on the way to Rapid City, S.D., so we decided to take 14/34 West to Sturgis, S.D. This was a good road, but not much to look at along the way. It was very hot and humid when we got to Sturgis. We did the bike test riding and walked around up town looking for t-shirts before gassing up and heading for Deadwood, S.D. Here we found a town packed with bikers. Finding no parking place we headed out of Deadwood and lunch along the way. Over lunch we decided to take road 385 to 244 and on to Keystone, S.D. and up to Mt. Rushmore to view the faces. We saw hundreds of bikes in groups along the way. Again it’s terrible hot and hard to find parking spaces. A parking ramp charged us $8 per bike to park. After viewing the faces it was decided to catch 79 back to Rapid City, S.D. We also decided if a motel room was available in Rapid we would take it instead of camping out that night. We thought our bodies deserved a motel after this 100 degree day. And we spotted a vacancy sign and got a motel room with a swimming pool. The cost was $160 a night and we got it for a $100. We felt it was well worth it, since we split it three ways. And the pool was very nice.

Wednesday, Aug. 8, found us up early and ready to travel by 7:30. It was already 80 degrees, so we knew this would be a warm one. To our surprise Pats battery was dead and needed to be jumped. A Kmart was spotted down the way and jumper cables were purchased for the trip through the mountains. We took highway 79 South to 36/16A through Custer State Park. We paid $5 per bike to travel through the park. This is always a beautiful ride. We rode the Wildlife Loop in the park. It was gas and breakfast and on the Needles highway. This ride is a motorcycle riders dream with the many curves and up and down hills.. Then we made our way up to 385 and on to Pluma, S.D. and 14A to Spearfish, S.D. Still very hot. Lunch at Perkins and off to a Honda bike shop to pick up a battery for Pats bike. Mel and Richard replaced the battery while Pat shopped. Then it was off on 85 to Belle Fourche, S.D. Here we gassed up and headed North on 85. The radio reports high winds gusting to 45 MPH and thunderstorms. A few miles down the road we ran into the very high winds and rain. The wind gusts seemed to move our bikes across the road. We ducked out at a road side store till the storm passed. Now it had cooled down to jacket weather. Bucked the wind all the way to Belfield, N.D. Arrived here around 8:30 P.M. It was supper and a shower and to bed by 10:30. Mel is usually tucked into bed by 9:30 at home, so he was really tired. It was planned to leave Thurs. morning by 6, since Richard had to travel East across the state.

Thursday, Aug. 9, found us up and greeted by 48 degree temps. What a change a few hours can make. Heavy clothes was put on for the last leg of the trip. Filled gas at Richardton, N.D. and off to Bismarck, N.D. for breakfast. After eating we shook hands and thanked each other for the great four days together. Richard headed East to Grand Forks, N.D. and Mel and Pat headed North to Minot, N.D. Another safe and fun trip was had by all. Need to start planning another trip.
Motorcycle travelers (below): Mel Gefroh, Pat McNally & Richard Becker 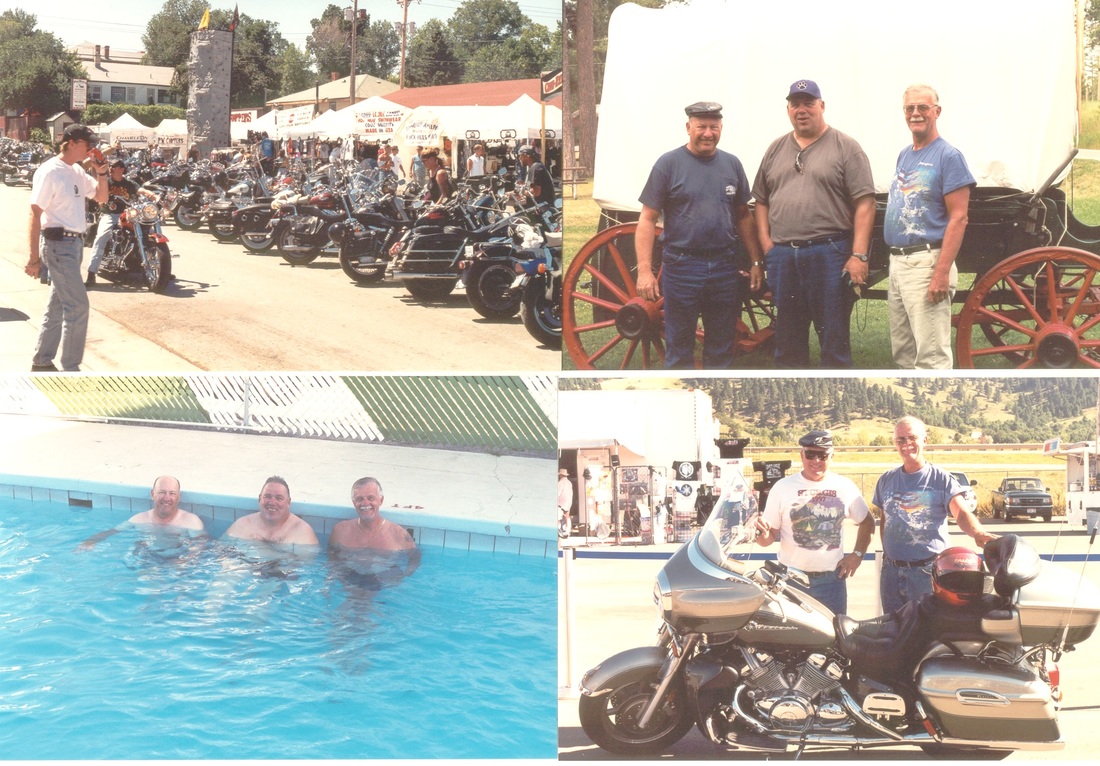