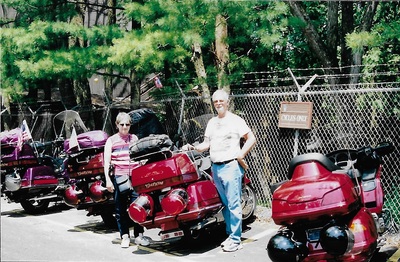 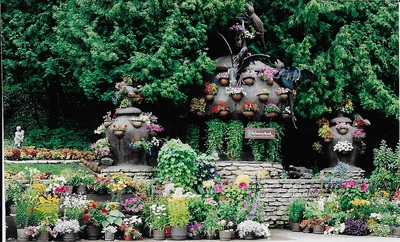 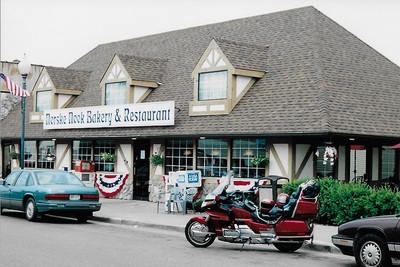 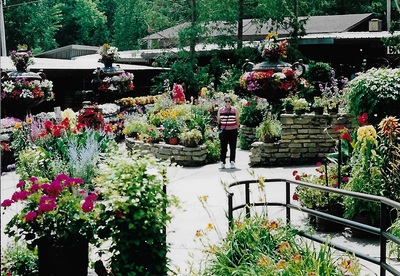 Nan had been mapping out this trip for months. So when she said. "let's take the motorcycle", but "NO" tenting.  I jumped at the idea. Her plan was to ride to Spring Creek, Wis., and tour the House on a Rock and back to MPLS to our son Don and his family. She had heard about this place and always wanted to see it. Her second choice was to stop in Osseo, Wis., and have a meal at the Norske Nook Restaurant & Bakery. The gift ware store that she worked at in Grand Forks, ND, carries a cookbook from this restaurant.

We packed the motorcycle on Sat., July 6, 2002, so Sunday morning we hit the road around 8 A.M. It was a cloudy, cool day. Just right for motorcycle riding. We stayed on Highway No. 2 to Duluth, Minn. Stopping along the way a few times to stretch and drink water. It turned out to be a hot day. Arriving in Duluth, Minn., around 3 P.M. We turned on exit 35 and it took us right down along the river. We stopped at Motel 6, so we checked in. Then we headed down 35 North and found our way down to the water. Here we purchased tickets to ride the ferry out onto the lake for a tour around the big terminals and to see some of the large ships. While standing in line to board the ferry we heard someone calling our names. Back near the end of the line we spotted Dennis and Karen Christanson of Minot, ND.  We visited with them after the ferry ride. We decided to purchase tickets to the Imax Theater show. After walking around town it was time for the show. Having witnessed these shows before we were looking forward to this. Coming out after the show we found rain about to come down. So we jumped on the bike and headed to our motel. After covering up the bike we walked to the cafe nearby for supper. This being around 9 P.M.. It started to rain as we walked back to the motel. A part of Richard's helmet/intercom had broken during the day and he was determined to find a bike shop to buy a new part. He called a biker in Duluth, Minn., and was advised of a bike shop in town.  He also told us if we were traveling to Spring Creek, Wis., we should be sure and stop in at Richland Center, Wis., and visit the Vetesnik Power Sports bike dealership and purchase my part. It's one of the largest motorcycle dealers in the US.

Monday, July 8, 2002, found us up early and listening to the TV for weather reports for the day. The forecaster said Duluth, Minn., had gotten 2.75" of rain overnight, but the clouds should pass during the day. Again we walked to the Embers cafe for breakfast and to check the map for our days directions. We had planned on riding the North Shore Drive, but with the rain hanging over us we decided to pack up and head East. As we left the motel it was very cloudy and foggy, but no rain. No rain suits at this time. It was decided to take Highway 55 South. As we got out of the lake area we found it sunny and very humid and hot. Some bank thermometers showed in the high 90s. At Eau Claire, Wis., we followed 53 to Osseo, Wis. This was the place Nan wanted to stop and eat. In this small town we found the Norske Nook Restaurant and a parking place right in front. As we entered the front door we found people standing around waiting for a table. This was around 2 P.M. It was worth the wait. The meatball dinner was great and the pie was better yet. Staying on highway 53 we headed for La Crosse, Wis. This was really very pretty country. Everything looked so green. At La Crosse, Wis., we switched to highway 14/61 and headed Southeast to Readstown, Wis. Here we took 14 to Richland Center, Wis. After a few wrong turns we found the Vetesnik Bike dealership East of town. What a pleasant visit this was. Never seen a bigger bike dealer in all my bike trips. Found the helmet part and Nan found a helmet liner. One of the salespeople gave us a tour of the large place. Now it was around 5 P.M. and we needed to find a motel. Found a ma and pa one up the street from the bike store. The motel was called "Lamplighter Motel". Small unit, but will do for a night. After unpacking the bike and cleaning up it was time to find a place to eat supper. This short ride found us in a rain shower, so it was under a bank canopy for a short time. We ate salads at a downtown cafe.

Tuesday, July 9, 2002, found us up early and ready to head to the House on the Rock. This was only a few miles East on Highway 14. The area was having some farmer days celebration, so we got caught in this slow traffic. The morning was warm and no jackets were needed. At Spring Creek, Wis., we had breakfast and headed West through town looking for this House on a Rock. Nan kept saying you can't understand it until you see it. And she was right again. Paying our $19.50 a person fee we headed for the house and the tour. We spent some four hours there. We thought we seen everything that was to be seen, but after Nan purchased a book she realized we must have missed a few spots and will have to go back another time. This is a must to visit place if you're in the area. We decided to take the same route back to La Crosse, Wis., and then go to Winona, Minn. The ride was beautiful, so we didn't mind traveling it again. Arrived in Winona, Minn., around 5 P.M. Found an American Inn and unpacked and took a swim. The swim felt great after the very hot day on the bike. After the swim we decided to go for a walk around Winona, Minn. Nan loved a couple of the old churches. We walked by the lake also. Found a small eating place, so we stopped for a sandwich. The baseball All Star Game was on this night, so Richard wanted to be get back to the motel to watch the game.

Wednesday, July 10, 2002, showed cloudy skies and showers. We decided to stay at the motel until checkout time and then decided what to do. Around 11 A.M. the rain had let up and the sun was peeking through. We thought we better skip looking around town and head for son Don's place in St. Paul, Minn. Rain suits were put on just in case of rain. We stopped at a little cafe along the way for lunch. Wouldn't have needed the rain gear. The trip ended at Don's place around 4 P.M. Just like always a lot of traffic in MPLS. We stayed at Don's until Saturday. Then we followed them to Park Rapids, Minn. They had rented a cabin for a week. We spent Sat. and Sun. with them. Kim (Don's wife) booked a cabin for our entire family for the next July. Randy, Michelle, and Megan are excited about coming from Colo. for the week get together. We arrived back in Grand Forks, ND, around 9 P.M., Sunday, July 14, 2002. The bike trip was enjoyable and safe.